No Farmer No Kobe Beef

Spotlighting the Key Stakeholders in the Background

When talking about Kobe beef, we must not forget about the role of the dedicated farmers who raise Tajima gyu cattle. Their hard work is recognized and rewarded in Kyorei Kai’s show, the biggest and most honorable cattle competition, held at the end of every year. Award winning farmers share their experience, skills and philosophy.
2017
2016
2013
2010

Katsunori Ohta from Ohta Farm won this year’s honorary award at Kyourei-Kai cattle show. He is the most winning farmer and continuously supplies the best Kobe beef with a grade of A5-12. We visited his farm nestled in the mountains of Tajima district to find out the secret to constantly produce Kobe beef of the highest A5-12 grade.

When Katsunori began helping the family farm business at the age of 18, the farm kept only 100 cows. Since then, the farm expanded and the number of cattle has increased to 1,600 heads that are housed in 13 cowsheds. To create a stress-free environment for the cows, the ceilings of the sheds are higher than what you find in other farms. “Large fans are attached on the ceiling and they help air circulation to keep the temperature lower and the floor dried. Tajima-gyu cattle are vulnerable to heat and performs better in cooler weather.”, explains Katsuya. He is the man who cannot sit still in the office. He checks on all the cattle every morning, feeding them and clean the sheds together with his 10 employees. “I take my son to calf auctions for buying calves and he still needs my advice to pick up right calves.”, says Katsuya.

The farm used to breed cows on a small scale when Katsunori’s parents were running it. The number of calving on his farm has been significantly increased over the past few years and there are always at least 150 pregnant cows waiting for calving. It is the result that Katsuya has been putting effort in breeding these years. Asked why he is putting efforts into breeding, he replies “In beef cattle industry, there are breeding and fattening farmers. Most of farmers specialize either in breeding or fattening and a fewer farmers do both. With the number of Tajima-gyu cattle declining gradually over years, it is important for fattening farmers to work on breeding to protect and preserve the lineage of Tajima cattle.”.

Passing on the tradition of farming Tajima-gyu cattle

Inside one of the cowsheds, we found Katsunori’s son, Kaisei. He began to work as an assistant farmer four years ago at the age of 15. When we spoke with him two years ago, he told us he was learning by visiting other farms as a hoof trimmer at the advice of his father. This time, he was taking care of a sick calf with a veterinarian. The mother cow looks anxiously as the two attend to the calf. “Calves are prone to getting ill when it gets cold. Six vets, including the doctor here today, work at the livestock veterinary clinic in Toyooka. They will come immediately when something’s wrong, even at night. We’re really grateful to them.”, explained Kaisei.   We asked whether vets also assist in calving. He replies, “We take care of the deliveries ourselves. I observe the calving and sometimes I assist by pulling the calf’s legs during hard delivery.”

Although the breeding is now going well, the farm struggled with many difficult labor until last year. It was Kaisei who solved the problem. Cows began having smooth deliveries after he changed the feed content and amount. When a cow puts on fat in the birth canal, it leads to a difficult calving. “I’m still no match for my father, but I can now almost always correctly predict which calves my father is going to purchase at an auction.”, smiles Kaisei. 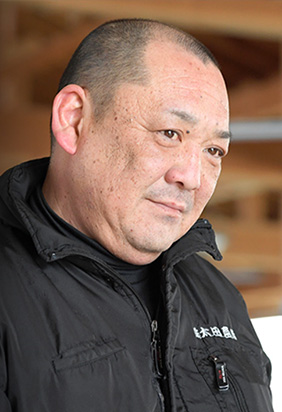 Katsuya Ohta, farmer of the year 2017 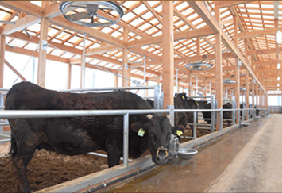 Tajima-gyu cattle are relaxed in the cowshed 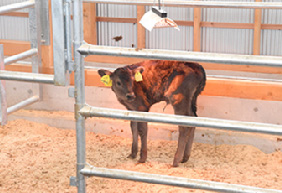 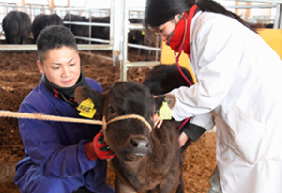 Kaisei and a vet check on a sick calf

Producing top quality beef that does not disappoint buyers

Naoki Yamanokuchi runs his fattening farm in Awaji Island has constantly producing A5-12 grade Kobe beef. “A5-12” is given to Kobe beef carcass that scores the best mark in all categories of yield, meat quality and marbling. Only a half of Tajima-gyu calves grow up for qualifying as Kobe beef, of which less than 0.5 percent receive “A5-12” grade. In 2016, one of his cattle fetched a record price and more meat brokers approach him for his Kobe beef now. But for Naoki, it is more important to consistently produce delicious beef that does not disappoint his customers than to win a prize or fetch a high price.

Working hard and keeping his herd at a manageable size

Naoki buys four to five calves and sell the same number of fattened cattle on the market every month. He maintains about 120 cattle on his farm that is a manageable size for him and his wife. Asked whether he has a plan to expand his cattle business and why he has been so successful, he laughs and replies, “I’m not thinking of increasing my business. The reason for success is just a matter of luck. Cows are living animals and there’s no telling what will happen. My cattle did their work well, that’s all.” Naoki’s aim in the future is to keep working hard as before. Compliments from his customers are the biggest reward for him

Overcoming the sorrow of losing his mentor

His uncle passed away this year. He was Naoki’s mentor in cattle farming. It was his uncle who encouraged him to move to Awaji Island for cattle ranching 12 years ago. He was a big presence for Naoki, helping with everything from finding a farm and barn, teaching cattle fattening skills, introducing to customers. Naoki says, “My uncle continued to give me a lot of assistance until just before he passed away. I can no longer rely on him and I am determined to do everything on my own.” 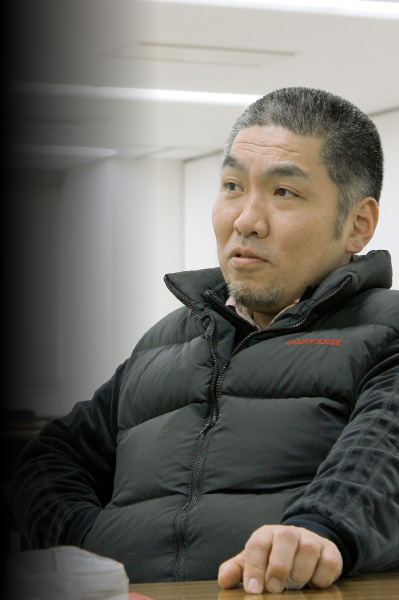 Naoki Ymanokuchi, farmer of the year 2016 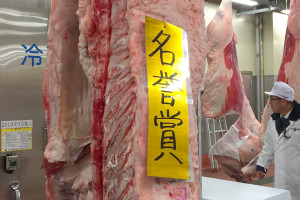 Kobe beef carcass that scored A5-12 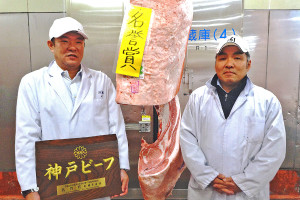 A buyer (left) and Naoki (right)

From breeding to fattening – an integrated production

Mikata county in Hyogo Prefecture is an area known for its heavy snowfall. It is where Shinya Ueda operates an integrated cattle production. He tells us, “My parents could not make a living on livestock farming alone and they worked elsewhere during the winter. Since I was young, I was determined to become a full-time cattle farmer.” True to his determination, Shinya has successfully expanded his cattle business over the past 20 years.

Because of the different skills required, many farmers specialize either in breeder or fattening. Breeding farmers inseminate their cows to produce calves, which they raise for 9 months before putting them up for sale at auctions. Fattening farmers buy calves from the market and raise them up to 28 to 32 month old. Having been a breeder, Shinya began to engage in the fattening six years ago. “I wanted to raise calves that could not find any buyer in the market and turn them into excellent beef cows.”, he explains. Of roughly 220 calves born on his farm every year, Shinya now keeps all female calves for fattening.

The key for raising excellent cows

The key for raising excellent cows is to have animal develop a strong and healthy rumen for increasing feed intake. After numerous trial and error experiments, Shinya has established a unique feed management program. And the effort is now starting to produce remarkable results. In 2013, one of his cows won the Distinction Award at Kyorei-Kai cattle show and it is one of the best cows he had ever produced.   Shinya confidently says, “The cow was small and unimpressive when it was a calf. It is a perfect example of how well my feed management system works. The cow responded to our efforts.”

Shinya used to visit cattle farms across Japan as a cattle hoof trimmer and he learned a lot from observing good stock farms, from cattle raising techniques to management skills. “Cattle farming techniques are evolving every year and we need to try different methods without sticking to one.”

Shinya and his four staff members operate to manage Ueda farm. One of them is his wife Miyuki, serving as the farm manager. As an employee of a bank, she resigned her job to marry Shinya and help his cattle business, despite strong objection from all her relatives. “Being a cattle farmer is harder than I had imagined. We work 365 days a year and have no holidays. Livestock farming is not for sissy. You need love and determination in what you do.”, says Miyuki. Ueda farm is now transforming to a fully integrated production system wherein all calves born on his farm are fattened there. 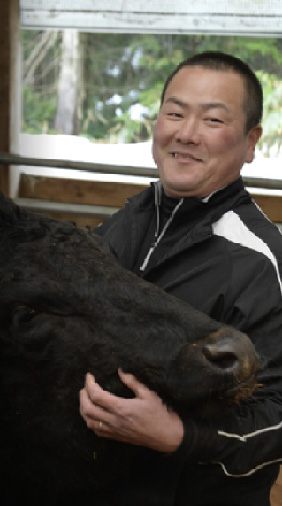 A sturdy cow snuggling up to Shinya 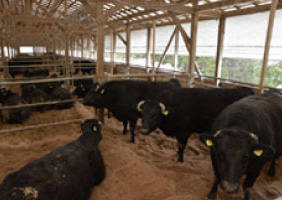 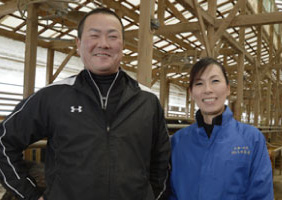 Taking over the business of her late husband

The Fukui Farm is located at Mt. Myogadani neighboring Kobe. Takeko’s small cowshed stands on the steep mountain slope, overlooking tranquil pastoral scenery. “After winning the award at Kyorei-Kai cattle show, my neighbors congratulated me on it. I was taken aback because I didn’t expect it turn out that way.”, chuckles Takeko. Her cattle scored A5-12, an outstanding achievement.

She learned how to look after cows by watching her late husband raise beef cattle, the business he started about 20 years ago. Takeko recalls that her husband was given a lot of wooden telephone poles that were no longer needed as a result of the country-wide switchover to concrete poles, and used these to build the cowshed single-handedly. He was well-known in the local community as a producer of fine-quality beef. Takeko is often complimented by locals, “Your husband is happy in heaven to see you winning the prize he had never won.”

The secret of success

Shortly before this year’s 160th Kyorei-Kai cattle show, Takeko had reared two A5 cows for two years in a row, which amazed those around her. She remains modesty and adds, “This was all possible thanks to rich natural environment and my love and affection to my cows.”

Clean water is drawn from underground aquifers deep under Mt. Myogadani. Rice straw is collected for feed from the local paddy fields. And, the cows are reared in cool mountain shade with Takeko’s warm love and affection. She enters the stalls in the cowshed every day to touch, communicate and share her feelings with her cows. Her family is worried that she might be kicked by the cows but Takeko says, “They love my scratch on their back and play with me as if they ask for more. My son praises me on how well I can handle the cows. When anyone else enters the cowshed, the cows walk around unsettled but they play with me when I do so.”

No end in cattle raising venture

81 years old Takeko decided to buy and raise two new calves this year. “This means that I have to work hard for another two years. My husband used to put his grandson on the farm machinery since he was a little kid. Now he’s grown up to help me out a lot on the farm.”, she says with a big happy smile all over her face. Rearing another champion cow is no longer a dream. 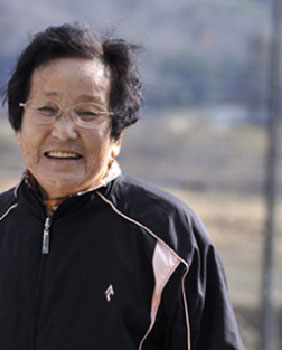 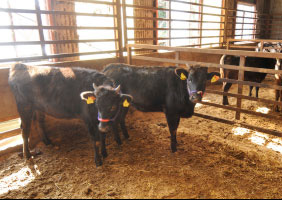 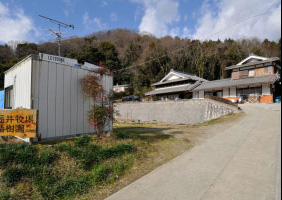